*This special performance is free and available to view here on our website and on our YouTube channel until 31 October, 2021.

To celebrate the opening of our 16th edition and our music strand, we are delighted to partner with Jazz re:freshed to showcase two incredible acts. Our opening night features online performances from rising stars Balimaya Project and Jas Kayser.

Jazz re:freshed is more than a label, it is a cultural and global movement. At its core, their mission is to globally elevate, amplify and spotlight the breadth of expression in UK Jazz, while breaking down the boundaries for audiences to access the music. From humble beginnings in 2003, tastemakers, Jazz re:freshed have gone on to launch the careers of countless artists such as Richard Spaven, Nubya Garcia, Shabaka Hutchings and Ashley Henry.

Despite the barriers of 2020, Jazz re:freshed is still on a mission to celebrate a genre and musicians whose performance opportunities are severely reduced right now, and to showcase the incredibly diverse, colourful, expressive and creative world of jazz music and alternative culture in the UK. These performances were filmed on-location at Subfrantic Studios with thanks to Arts Council England, PRS Foundation and The Culture Recovery Grant. 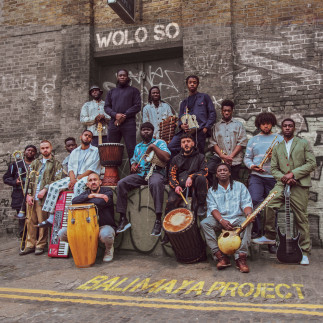 Balimaya Project a 16-piece supergroup of driving polyrhythms, blazing horns and virtuosic kora, deliver a dynamic meeting of traditional Mandé music and contemporary jazz. Led by composer/arranger and leading UK-based Djembe player, Yahael Camara Onono and featuring members of bands including Kokoroko and Seed Ensemble, the group synthesize and bridge London’s bustling jazz circuit with traditional repertoire and folklore of the Mandé peoples of West Africa. Five years in the making, they released their debut album Wolo So on Jazz re:freshed in July 2021.

Translating as the essence of kinship in Mandé’s Maninka language, Balimaya Project articulate the complex experiences of being children of the African diaspora in the UK, connecting the future-facing and the ancestral in the spirit of Felt Kuti or Sun Ra big bands before them. Read more about them below. 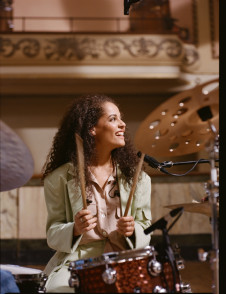 Jas Kayser is a 24-year-old Berklee educated British drummer. Mentored by Terri-Lyne Carrington and currently moving between London and Panama City, where she teaches at pianist Danilo Perez’s Jazz Foundation, she’s also a composer and band leader who loves to explore the commonality between jazz and afro-beat.

Jas has featured in bands with leading British lights Nubya Garcia, Ashley Henry and Jorja Smith as well as American drummer Ralph Peterson’s Big Band, and had a starring role on drums alongside Lenny Kravitz in the official video for his song Low.

Filmed on location at: https://www.subfrantic.com

Led by composer/arranger and leading UK-based Djembe player, Yahael Camara Onono and featuring members of bands including Kokoroko and Seed Ensemble, Balimaya Project intently synthesize and bridge London’s bustling jazz circuit with traditional repertoire and folklore of the Mandé peoples of West Africa, and in turn connect the music’s contemporary and ancestral forbearers.

Following the group’s formidable debut set at influential label, festival & weekly live music event, Jazz re:freshed in October 2019, Balimaya Project’s Wolo So arrives five years in the making, yet its roots chart a young percussionist forging a deeper musical identity from even further back. Meaning the "essence of kinship" in Mandé’s Maninka language, the word Balimaya articulates a family model not limited to blood relations but of a shared history and experience, of friendship and community, a concept at the heart of Camara Onono’s vision for the 16-piece group.

“I wanted to form something musical that went beyond what we know as a band but be a place which was closer to a support network. It’s become a brotherhood...The size of the band is important. I wanted a fuller sound and the traditional music calls for this many instruments…we are mainly young black men from London or the UK.

Coming together, being emotionally available as young black men in the diaspora is just not celebrated enough. We all rely on each other. I wanted to create a space with people from the same perspective, culturally but also with people that have the ear on the ground when it comes to black Britain and music from the continent."

Like Fela’s Egypt 80 or Sun Ra’s Arkestra before, Balimaya Project are a big-band unlike any other, comprising all-male members, made up of players across UK’s intricately entwined musical landscape from Afrobeats and jazz to UK rap.

Born in Harlesden, North-West London to a Nigerian mother and Senegalese father, Camara Onono began playing percussion at an early age, receiving his first talking drum from his grandfather at the age of six before making the move to Djembe a couple years later. Playing at various community events and naming ceremonies in London led him to meet his mentor, Djembe master, griot musician and hereditary praise singer, Sidiki Dembélé. Between trips to and from Senegal, Nigeria, Ivory Coast and The Gambia to see family and greater inform his playing style and knowledge base of Mandé tradition, Camara Onono performed in groups across the British jazz spectrum from eclectic Afro-Venezuelan 8-piece Family Atlantica to the meditative, outernational dynamism of Maisha, combining both practices to create what Camara Onono calls Mandé Jazz.

“I don’t like the term Afro-Jazz. Just because it’s from Africa does not mean it’s not just jazz. I felt it was time to be specific and be firm in what I thought would be helpful in my community and for others that are learning.”

Mandé in spirit, international in outlook, Balimaya Project’s both uniquely intergenerational approach to composition and faith in each member’s ability is the foundation the group is built on and is the centrepiece of a new documentary film tracing Camara Onono’s return to Senegal at the start of 2021, and exploring themes of identity, brotherhood, perceptions and family.

Jas Kayser is 24-year-old drummer, composer, band leader and Paiste Cymbals and Natal Drums artist from the UK currently based between London and Panama City. Jas’s most recent release is her sultry new Debut EP Unforced Rhythm of Grace, available now on all platforms. This release has gained attention and support from London's impressive jazz scene such as Jamie Cullum, BBC 3, Jazz FM and Jazzwise.

Jas completed her undergraduate and masters degrees at Berklee College of Music whilst studying and playing alongside mentors such as Terri Lyne Carrington, Danilo Perez, Ralph Peterson and Neal Smith. During this time Jas began to explore the common grounds between Jazz and Afro-beat which led to her creating her original sound and compositions.

Jas has featured in bands with leading British lights Nubya Garcia, Ashley Henry and Jorja Smith as well as American drummer Ralph Peterson’s Big Band and had a starring role on drums alongside Lenny Kravitz in the official video for his song Low. Jas has also presented her original band at Jazz Re:Fest 2020 Online, London Jazz Festival 2019, RISE concert in Boston supporting Terri Lyne Carrington and Panama Jazz Festival for the past 2 years. Additionally, she has also played with various bands and artists like Jacques Schwartz-Bart, Donald Harrison in the Ralph Peterson Big Band and Luciana Souza at venues around the US such as Scullers Jazz Club, Rockwood Music Hall and Newport Jazz Festival, among others.