We're delighted to present this Producer Masterclass, where an audience of young people of colour will have the opportunity to learn about the challenges and triumphs that she has experienced thus far. This is also an opportunity for young creatives to hear first-hand how an artist can carry an idea from conception to completion and directly ask her questions of their own. If you're wondering:

Then this is for you! 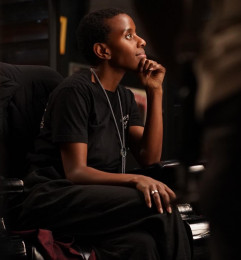 Precious Mahaga is a British-Kenyan producer based in London, UK and head of music video at Agile Films. She started her career as a production runner on long-form television production before joining Greatcoat Films, where she worked her way through the production ranks and eventually became head of  music videos for the company. Following this, she moved into freelance producing, working on projects for Pulse Films, Somesuch, Friend London and Smuggler.

She has a keen interest in narrative projects which share the stories and experiences of marginalised social and cultural groups. Recent, notable projects include Trouble, the award-winning narrative music video for Kano, directed by Aneil Karia, and award-nominated music videos for Michael Kiwanuka’s Hero and Jorja Smith’s By Any Means. She was also line producer on Two Single Beds, a short film written by and starring Daniel Kaluuya, and is currently in producing two short films, in collaboration with the British Film Institute and Netflix.

Inner Visions: Producer Masterclass with Precious Mahaga is screening as part of: