Our annual Short Film Competition returns for the fourteenth year, showcasing the work of emerging filmmakers from across the continent and the diaspora. This year's shortlist was selected from over 600 entries, and the finalists comprise a broad range of films, each with a unique style, narrative and voice.

The shortlist was compiled by students in Film and Television Studies at the University of Glasgow. The jury winner, who will receive £500, is selected by our jury of acclaimed Black / African creatives and will be announced on our website at the end of the festival. The 2021 jury consists of: 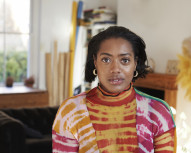 Eloise King is an award-winning filmmaker and former Global Executive Producer at VICE, overseeing the brand’s digital channels in the UK and i-D’s globally. Her projects have generated over 100 million views and have crossed digital and major terrestrial platforms, including BBC, Channel 4, ITV, MTV, A&E, and Al Jazeera English. Her work has been exhibited at The ICA, Tate Britain, V&A, and MoAD.

Ntare Guma Mbaho Mwine is an actor, playwright and director. He has portrayed recurring roles in Steven Soderbergh’s series The Knick, David Simon and Eric Overmyer’s HBO series Treme, Amazon series Bosch, and Tim Kring’s NBC series Heroes. He has taught at Yale University and has taught theatre and film artists in more than a dozen countries in Africa. Mwine is set to direct an upcoming documentary on Ugandan studio photographer Kibaate Aloysius Ssalongo, which Steven Soderbergh is Executive Producing.

Yared Zeleke is an Ethiopian-American director and writer. His first feature, Lamb, was screened in the Un Certain Regard section of the Cannes Film Festival in 2015 and made the shortlist for the 2016 Oscar’s Best Foreign Language Film Award.

You - the audience - have the opportunity to rate the films using the star-rating system (5 being the highest and 1 the lowest) displayed below each film. These will be collated during the festival and the Audience Award winner will be announced on our website at the end of the festival.

All the short films are available to watch on the Africa in Motion website.
All competition films will be available for the duration of the festival (Fri 15 Oct to Sun 31 Oct).