How to Attend an African Film Festival Event

"I think that images are very fascinating and very important...  But right now, cinema is only in the hands of filmmakers because most of our leaders are afraid of cinema."

How to Attend an African Film Festival describes a provocative inquiry into the modes and methods of the film festival circuit. With a focus on festivals specifically platforming African or Black narratives, the panel discussion will continue a conversation about the politics of filmmaking and film-viewing in the context of racialised, gendered, and geopolitical regimes of identity.

Curated by Africa in Motion's programme producer, Tanatsei Gambura, this panel discussion will shed light on how dominant ideologies of African identity, voyeurism and cultural representation have shaped the film industry and wider visual cultures. Driving inquiries include: what should the purpose of African film be? What are the main challenges faced by the industry in delivering this purpose, and what do we do about them? 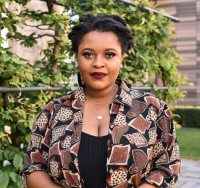 Tanatsei Gambura (she/they) is a post-disciplinary artist and cultural practitioner working transnationally.
In both artistic and curatorial capacities, her work is foregrounded by creating socially engaged experiences that centre rest and nourishment whilst inventively exploring the dimensions of justice, joy, and care.
In her role as Programme Producer at Africa in Motion, Tanatsei is exploring the socio-cultural dimensions of African cinema. In the past, Tanatsei has served on the Edinburgh International Film Festival Youth Board and programmed the event 'Movements, Monuments, and Change' with Aya Films as part of the British Film Institute's 'Hopeful' film season. Tanatsei has been a guest curator for Femspectives Glasgow Feminist Film Festival and workshop facilitator at Glasgow Film Festival. In 2020, she was selected for Film Hub Scotland's New Promoter Scheme, working to co-produce Take One Action Film Festival's annual program.
(Photograph of Tanatsei Gambura © Ellie Morag, 2021) 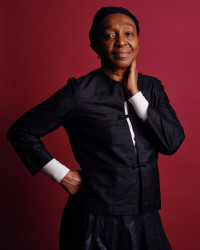 Mahen Bonetti was born to a family that has experienced the ups and downs of post-colonial politics. Bonetti received her bachelor of arts in administrative studies at Bradford College and pursued graduate studies in media communication at New York University. She worked at Young and Rubicam and at Newsweek's editorial and advertising division, before becoming founder and executive director of the African Film Festival Inc. in 1990.

Keith Shiri is an international film curator and programme advisor to various film festivals including the BFI London Film Festival. He is an Expert and Consultant on Film Business Development for the International Trade Centre (ITC) an agency of the United Nations. He is currently the Regional Secretary (Europe)for the Federation of African Filmmakers (FEPACI), a Visiting Research Fellow at the Centre for Research and Education in Arts and Media(CREAM) University of Westminster, London and the director of Books of Africa. Image credit: Dominika Wenz. 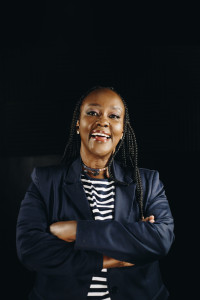 Judy Kibinge is a filmmaker who began her career in advertising. She has written and directed several award-winning fiction and documentary films. In 2013, she founded DOCUBOX, Sub Saharan Africa’s first homegrown fund and hub for independent filmmakers. She is a founding member of the Creative Economy Working Group (CEWG) formed to shape cultural policy in Kenya.  In 2021, she was named Most Influential Woman in Film at the Women in Film Awards (Kenya).  She is a member of the Academy of Motion Picture and Sciences (The Oscars) and a sitting member of the Documentary Branch Committee for three years running.