Content Warning: This film contains scenes of graphic violence that some may find distressing.

Join us at Strathclyde Union as part of After the Pandemic @ COP26 for this free film screening.
This film is presented through a collaboration between After the Pandemic and Africa In Motion as part of 12 days of conversations about how we RETHINK, REIMAGINE and REDESIGN our spaces to be greener, more vibrant and more resilient. This screening is supported by People Make Glasgow.

In August 2012, mineworkers in one of South Africa’s biggest platinum mines began a wildcat strike for better wages. Six days later, the police used live ammunition to brutally suppress the strike, killing 34 and injuring many more. Using the POV of the Marikana miners, MINERS SHOT DOWN follows the strike from day one, showing the courageous but isolated fight waged by a group of low paid workers against the combined forces of the mining company, Lonmin, the ANC government and their allies in the National Union of Mineworkers. What emerges is collusion at the top, spiralling violence and the country’s first post-colonial massacre. South Africa will never be the same again. 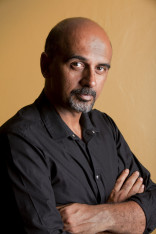 Rehad Desai is a South African producer and director who runs his own film and TV production company Uhuru Productions. Following his return from exile in the UK, Desai worked as a trade union organiser, a health and safety/media officer for a chemical workers union and a director of a HIV prevention NGO.

He then entered the TV and film industry as a current affairs journalist, and has since focused his energy on documentary productions with historical and socio –political topics, much of which has received critical acclaim. He is leading activist and spokesperson of the Marikana Support Campaign.