A young man begins to embrace his African heritage in a hostile environment. Rough lead pencil boils onscreen, adding to the irritating static of an unfriendly environment. In contrast, the coloured crayons seem to dance, as does our character as he presses forward in his journey of self-discovery.

Victor OluSola Opeyokun is a freelance artist who made his break in animation when he directed and animated Rooted during his studies at Humberside university in Hull, England. The film has been shown around the world and is also featured in the BFI archives and BFI Player. He has worked on commercials, animated productions and has built an animation department in a school. He currently runs specialised traditional 2D hand drawn animation workshops in various venues around London. Opeyokun also advises and works with numerous companies using animation as a tool to target a variety of audiences. 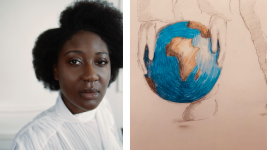