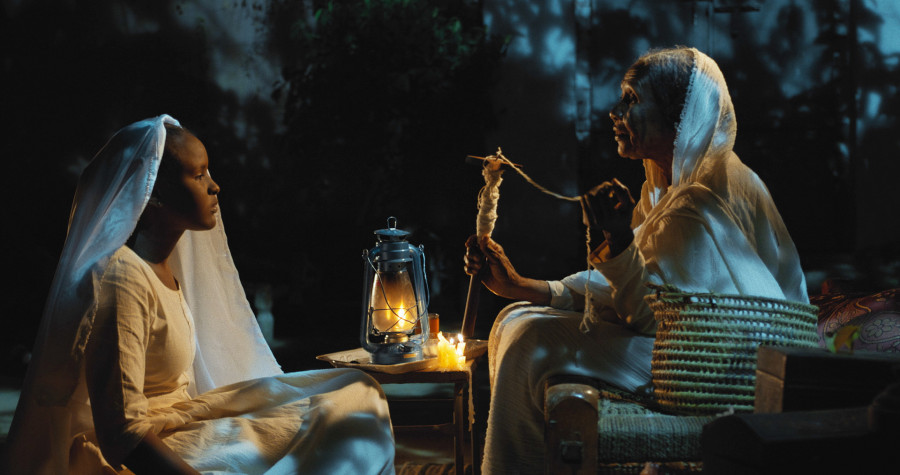 Monday 30 August 2021, Glasgow. Africa in Motion Film Festival (AiM) is delighted to announce three world premieres as part of the 2021 festival edition. The festival has commissioned new poetry from three Black female poets with support from the Scottish Poetry Library and Obsidian Foundation. Each poet will produce a recorded performance of their poem and talk about their new work at an event during the festival. These poems are part of a special strand that is a response to the COP26 climate change conference taking place in Glasgow in November 2021. The poetry commissions will present an inquiry into the embodied experience of Blackness and being in the environment, the changing climate, and the need for communion with nature as a means of healing and resistance. This project further considers political borders as spatial phenomena that insidiously interfere with our perceptions of the environment. They have real implications on how we move (or do not move) through space, place, and time. Asif Khan, director of the Scottish Poetry Library says,

“Much like Scotland, poetry has deep cultural roots and is loved across the African Diaspora. The Scottish Poetry Library is international in its outlook, and we also acknowledge and embrace the diverse ideas, perspective and talent that New Scots contribute to our communities, workplaces and creative arts. Film is an ideal medium to share and present poetry with global themes in a new light. We look forward to showcasing this year’s commissions, and also to developing an equitable long-term partnership with Africa in Motion.”

The selected poets are Tjawangwa Dema, Clementine Ewokolo Burnley and Zakia Carpenter-Hall. Dema is the winner of the Sillerman First Book Prize, an honorary fellow of the University of Iowa’s International Writing Program and an Honorary Senior Research Associate at the University of Bristol. Her poetry and essays on poetic pedagogies have been featured in various publications, most recently New Daughters of Africa. Burnley is a 2021 Sky Arts Award Winner, an alumnus of Obsidian Foundation and a 2021 Edwin Morgan Second Life Grantee. Her work has appeared in Parabola Magazine, the National Flash Fiction Anthology and The Centifictionist.  Carpenter-Hall is an inaugural winner of Poetry London's mentoring scheme, a 2020 Jerwood Bursary Recipient, London Library Emerging Writer and was shortlisted for The Alpine Fellowship Writing Prize. Her poems have appeared in Callaloo, Magma, Wild Court, 3:AM, XR Writer’s Rebel.

The festival is also delighted to announce the shortlist for the annual Short Film Competition. Due to the unique circumstances still ongoing due to Covid, the screenings of the films will be completely free and online for the duration of the festival. AiM’s annual Short Film Competition has been running successfully since 2008 and this year, the festival received over 500 entries of an outstanding quality and variety, including animation and hybrid documentary work. Filmmakers from Africa and the diaspora were invited to submit short films made after 2019 with a running time of no more than 30 minutes. The winning film and director will be announced at the festival’s closing. Viewers will be able to submit ratings after watching the films and an Audience Choice Award will be granted as a result. Ranging in topic, theme and form, the virtuosity of African film has shone through once again. Viewing committee member Milda Valiulytė says,
“The quality of films this year was really high, making our job very tough. However, after a lengthy and open discussion, we selected a variety of genre, style and tone that reflect the immense talent of African filmmaking, and the range of stories that are being told.”

The winner will be selected by an expert jury of international film practitioners well versed on the experiences of African and Black diaspora filmmakers. Yared Zeleke is an Ethiopian-American director and writer. His first feature, Lamb, was screened in the Un Certain Regard section of the Cannes Film Festival in 2015 and made the shortlist for the 2016 Oscar’s Best Foreign Language Film Award. Eloise King is an award-winning filmmaker and former Global Executive Producer at VICE, overseeing the brand’s digital channels in the UK and i-D’s globally. Her projects have generated over 100 million views and have crossed digital and major terrestrial platforms, including BBC, Channel 4, ITV, MTV, A&E, and Al Jazeera English. Her work has been exhibited at The ICA, Tate Britain, V&A, and MoAD. Ntare Guma Mbaho Mwine is an actor, playwright and director. He has portrayed recurring roles in Steven Soderbergh’s series The Knick, David Simon and Eric Overmyer’s HBO series Treme, Amazon series Bosch, and Tim Kring’s NBC series Heroes. He has taught at Yale University, and has taught theatre and film artists in more than a dozen countries in Africa. Mwine is set to direct an upcoming documentary on Ugandan studio photographer Kibaate Aloysius Ssalongo, which Steven Soderbergh is Executive Producing.

Early-bird festival passes go on sale from Tuesday 31 August, 2021. Passes start at just £10 (concession price) and £15. Single tickets will be available once we announce the full programme, and we will maintain our sliding scale ticket system, so there’s an option for everyone. From 27 September 2021, the festival passes increase to the standard price of £30/£25.

About the Scottish Poetry Library

The Scottish Poetry Library (SPL) is a charitable organisation committed to collecting and presenting Scotland's poetic works. In other words, it is the nation's bookshelf for poetry: a unique, inclusive place that inspires creativity, nurtures talent, supports learning and literacy, and fosters and promotes well-being. The SPL brings people and poems together through lending books, developing creative writing practice, facilitating shared reading experiences and showcasing poets. The SPL celebrates and shares poetry by engaging diverse audiences in its building and across Scotland through a programme of activities, commissions and partnership projects. The SPL recognizes that Scotland is home to a plurality of cultures, languages and communities, and that we make an important contribution not only to how the country sees itself but also to how others see us.

Founded in 2020, Obsidian Foundation is an international organization committed to cultivating the artistic and professional growth of Black poets. Obsidian runs a one-week retreat for Black poets of African descent selected by application who want to advance their writing practice, and led by five Black acclaimed tutors. Inspired by the achievements of the Afro Style School, Black Arts Movement, Caribbean Arts Movement, Malika’s Kitchen, The Complete Works, and Octavian; they aim to  create a community of Black creative diversity where poets are fully self-expressed free from racism.