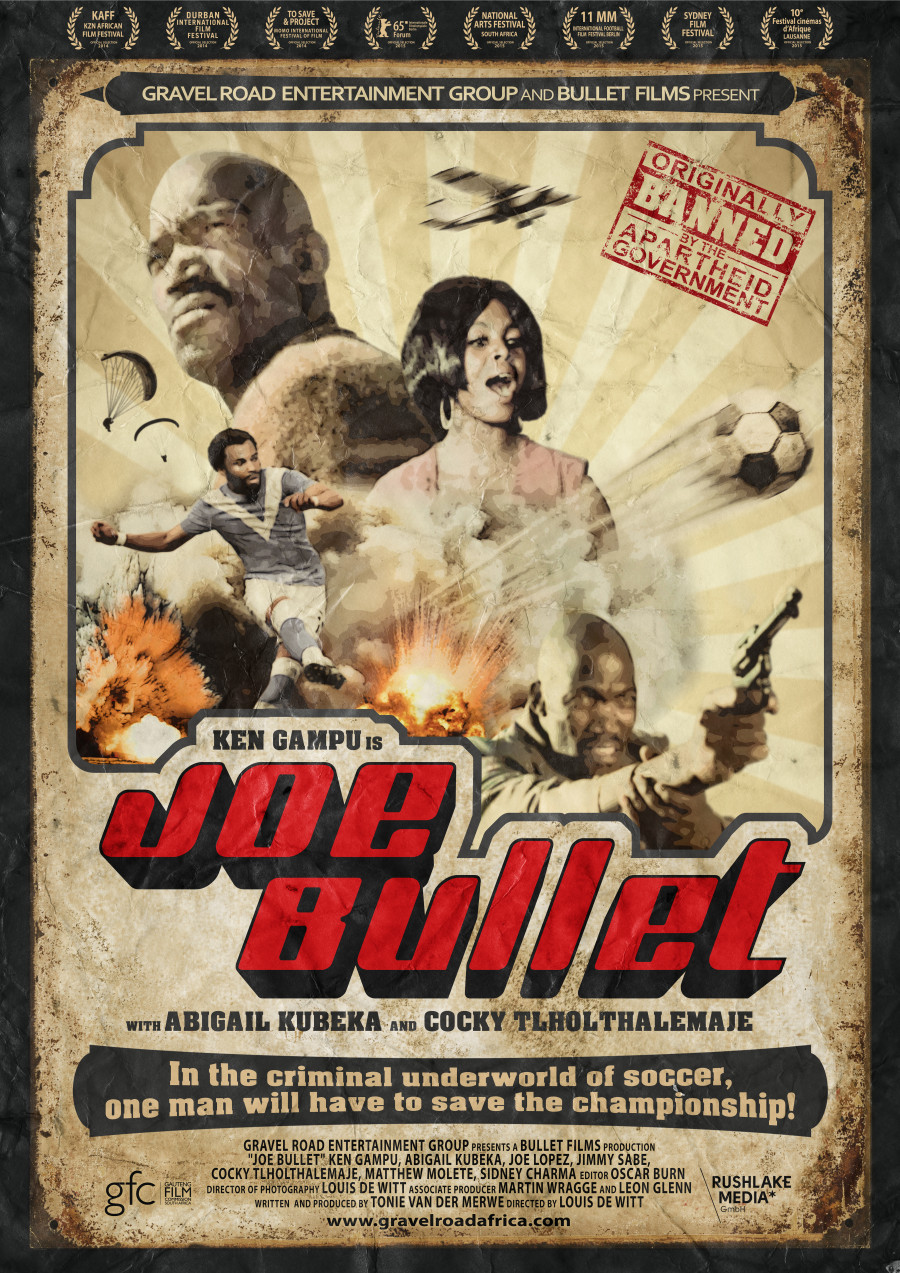 When a mysterious gangster begins to sabotage the chances of The Eagles football team of winning an important cup final, only one man has what it takes to find out the identity of the criminal mastermind behind the scandel and take them down: Joe Bullet (played by Ken Gampu).

South African Blaxploitation film Joe Bullet is drenched in the sort of B Movie brilliance that Tarantino would adore; full of conspiracy, intrigue, Kung-Fu, and featuring a ridiculously catchy theme that tells you exactly why Bullet “is the man”, Joe Bullet has an irresistible charm that makes for an utterly entertaining viewing experience.

Produced in 1973, Joe Bullet was one of the first all-black films made in South Africa during the country’s apartheid government and, after only two screenings in Johannesburg, Joe Bullet was banned. It was sentenced to spend the next forty years lying in the garage of its producer/writer Tonie van der Merwe. Thankfully, Joe Bullet has since been rediscovered by Gravel Road who have painstakingly digitally restored it so contemporary and future audiences can enjoy it and witness a lost part of South African history.

We spoke to Ben Crowley from Gravel Road to find out more about the experience of digitally restoring Joe Bullet as well as the possibility of seeing an incoming wave of South African cult classics in the near future.

Joe Bullet was banned by apartheid government around forty years ago after being screened only twice. Did you know much about the film when you first found it?

BC: Very little. There wasn’t much in the way of published records or anything. It seemed to have been a bit of a myth until that stage.

Digitally restoring a film is not an easy job. Could you explain to us about the process of restoring Joe Bullet? Did any particular issues arise during its restoration?

BC: Restoration is a labour of love; it’s a very long and painstaking process. This film was in fact the first film we restored so there was a lot of learning as we went along. The biggest challenge with this one was that we were working with very well used print (as opposed to the negs [negatives]). Tonie, the producer, over the years regularly laced the film up on his own projector and screened it for family which resulted in extensive damage. We also discovered that all the dialog was ADR [Automatic Dialogue Replacement] done more than a year after the picture was shot. There was no script to work with and, in some cases, the original actors were no longer around so sync was a big issue for us. A couple months into the process, we managed to locate a second print which was a bit of a god send as there were sections of the film in the original that were so bad that we could not do much in the way of restoration but with a second print, we were able to replace them with the better sections. We also discovered that the second print had a whole bunch of other scenes and cut-aways; in fact, it was 11min longer than the original!

What did it feel like when you first seen the restoration of Joe Bullet for the first time? It must have been truly special.

BC: It was a very special moment as I’d seen the whole process through from the start – literally carrying five dust covered 1000ft 35mm rolls into the lab. One is always critical of their work and I think every filmmaker is (even though I was not the one who directed or produced the film itself but rather the restoration). You always believe that there is room for improvement but eventually you have to let go and let it be.

There are many weird and wonderful stories about lost films being found in strange places. How did you come across Joe Bullet and have you found any films in unexpected places?

BC: Joe Bullet was brought to us by the producer/writer, Tonie van der Merwe, in a very roundabout way. Tonie and I met regarding a project he was trying to get off the ground at the time (and until that moment, I did not really know who he was or what he had done in the past as google did not result in any leads). During our meeting, he revealed that he in fact produced and wrote Joe Bullet as well as an additional four hundred other films in the 80s. I questioned where all these films were and he, by the way, said that he had six lying in his garage at home including Joe Bullet, and that is really where it all started.

Many of the films were found in storage, garages and attics, and even shipping containers on some farms. Then there is the obvious, the National Film, Video and South Archives – many ended up there in the early 90s. In some cases, we were too late where (literally weeks before) family members of deceased filmmakers dumped their films not knowing what to do with them.

After watching Joe Bullet, it’s clear that you have unearthed a true hidden gem and part of, what is essentially, a lost piece of South African history. Do you believe there are other hidden gems like Joe Bullet that are still to be found?

BC: Definitely. Time is unfortunately not on our side; many filmmakers are passing and with them, their films and all their stories disappear.

With similarities to Blaxploitation films of the likes of Shaft, Joe Bullet has that brilliant B Movie charm to it that kept a huge smile on my face throughout the film. Do you think Joe Bullet is a film that will resonate with cult film fans and could we potentially see a whole new breed of lost South African cult classics in the future?

BC: I do hope so. The last three years have been all about educating global audiences that South Africa did in fact have a film industry using Joe Bullet as a case study – but it is an uphill journey. Festivals such as Africa in Motion play a key role in giving this era the exposure it needs.

We’re busy restoring Bullet on the Run, due for release in February 2018 (hopefully premiering at Berlinale – where Joe Bullet premiered in 2015). It is the official sequel, produced more than ten years after the original!

For Ben and his team at Gravel Road, the project of restoring Joe Bullet has been a long and difficult process but the dedication, care, and love that has been poured in by everyone involved throughout the process has paid off immensely. Gravel Road have essentially resurrected a forgotten piece of film history which could be part of a potential wave of rediscovered South African cult classics.