AiM 2017 INTERVIEW | Women and Film in Tunisia : An Interview with Filmmaker Selma Baccar 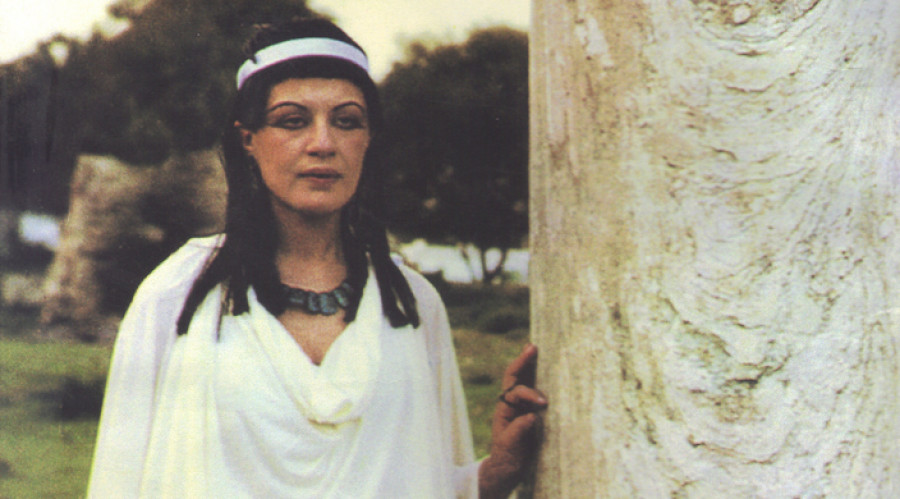 I had the great opportunity recently to interview the first female film director in Tunisia, Selma Baccar, a few days before the screening of her pioneering movie on female activism in North Africa called FATMA 75. Her film will be showing at Africa In Motion 2017 as part of the Africa’s Lost Classics (ALC) initiative. ALC is a UK-wide season of classics forgotten gems of African cinema introduced by Dr Lizelle Bisschoff (University of Glasgow) and Dr David Murphy (University of Stirling); this initiative is supported by the Arts and Humanities Research Council.

Selma behind the camera

FATMA 75 is your first fictional documentary, a feminist essay-film made in 1975, which was declared as the UN International Women’s Year for the 1st time. The story introduces us to Fatma, a young female student who is doing researches for a presentation on women’s battle for the acquisition of their rights in Tunisia. This starting point comes as a pretext to witness three generations of famous women in the nation’s history and learn about great female figures of Berber independence.

First of all, could you tell us more about women’s place in the Tunisian culture in the 70.s? What was the social and artistic context for them then?

Women and the whole society in Tunisia in the 70s were driven by the common dream to engage in building a progressive and modern country by breaking taboos that were imposed by tradition and conservatism. Women were trying hard to gain a place outside the family bosom. You could find female doctors, lawyers, laboratory assistants (pharmaceutical workers), and even police officers. However, it was clearly more difficult for women to gain a respected and worthy of honour status in the artistic and political spheres. They had to work twice as hard as men to find a place particularly in the artistic world. But I managed to do it and I was able to become the 1st female assistant film director, then a film director (Fatma Skandrani is actually the 1st female TV director). After that, I became the 1st studio manager and finally a Production director in 1989.

What personal motivation drove you to make FATMA 75? What were your intentions with this film?

The UN International Women’s Year created a great opportunity for me to start a career as a film director and it was the logical follow up after 5 years working as a TV assistant director. I took the chance and challenge to prepare the ground and pave the way of what would become a permanent quest in all my films: the restitution of our collective memories. But it ended up with the censorship of FATMA 75. Before it was censored, I was suggested by the people in power at the time to alter some facts. But I refused, gathering that my role was to piece together the past, and not falsify history.

What was easy and what was difficult in making the film at the time? What source material and what support did you have?

The film was financed by official government bodies after presenting a detailed synopsis. But the leaders, who did not know much about script writing, were “disturbed” by the way I had put together the contents of the scenario. Access to the archive documents had been a long tedious and laborious process, which was possible by meeting and being supported by some people who experienced the time before independence, people removed from the public sphere for political reasons or simply for personal egos of some leaders.

Due to censorship the film has hardly been screened publicly. How did you feel about it and what do you expect now with the release of a restored version?

The core reason for censorship lay in the fact that the official speech at the time wanted to impose the idea that women were in a privileged position in Tunisia compared to other Arabic and Muslim countries. Bourguiba, who promulgated the Code of Personal Status (CPS), wanted to be officially and exclusively held responsible for this situation. My film, while acknowledging the merits of Bourguiba, was demonstrating that before him, some men and women had played a great role and prepared the grounds for Tunisian society to accept his politics.

However, although the film was censored, it has been often shown clandestinely inside and outside Tunisia, because at the time I managed to transmit a copy to a Dutch distribution company. This copy included huge Dutch subtitles on which I added French ones.

That’s why I am absolutely delighted, proud and relieved today to have a new copy from the partially restored film. This is a new life for FATMA 75, which, since the Tunisian Jasmin Revolution in 2011, has gained new interest inside and outside the country. The film remains a sincere and genuine testimony about a significant period. It allows comparisons with the present time, as the Islamists tend to push our customs and traditions backward and prevent the essential nature of our society.

The film introduces three generations of women whose voices and activism set the foundations for new rights for Tunisian women, all this resulting in the promulgation of the Code of Personal Status (CPS). What is the role of the Code in Tunisia today, after the Tunisian Revolution?

The CPS is the biggest benefit for women in the Tunisian society, as a whole. It was compromised when the Troïka and Islamist Party came to power for 3 years in 2011.  But fortunately, the Democratic Parliamentary Group (whom I belonged to as a Vice-President and then President) and the civil society, including a female majority, have organised such an impactful resistance that we were able to save the CPS’s essential benefits. However, we cannot deny that mentalities have changed tremendously and retrograde ideas unfortunately have come through in a large proportion of society.

FATMA 75 is considered as a feminist pioneering film from North Africa. Did your involvement continue after the film? And today?

After 3 years spent in the Constituent Assembly and battling to safeguard democratic principles, secularity and equality for men and women, I came back to cinema with my last film ELJAIDA which will be screened in premiere during the Journées Cinématographiques de Carthage Film Festival (4 - 11 Nov 2017), before national release. With this new movie, I continue my battles for more freedom and dignity, denouncing the situation of injustice that women and resistance have been recently undergoing.

Could you recommend other Tunisian female film directors to the audience?

Female directors from my generation were no more than 5 at the time, but today we have more than 10 younger and older female directors, all coming from a diversity of backgrounds.

What are, in your opinion, the new challenges in the Tunisian film industry nowadays?

It is essential to produce more and more films. A real national cinema will exist only if we produce a variety and diversity of films. 2016 and 2017 have been exceptionally rich years with no less than 19 feature films selected for the JCC.

Thanks a lot Selma, and all the best for your new film.