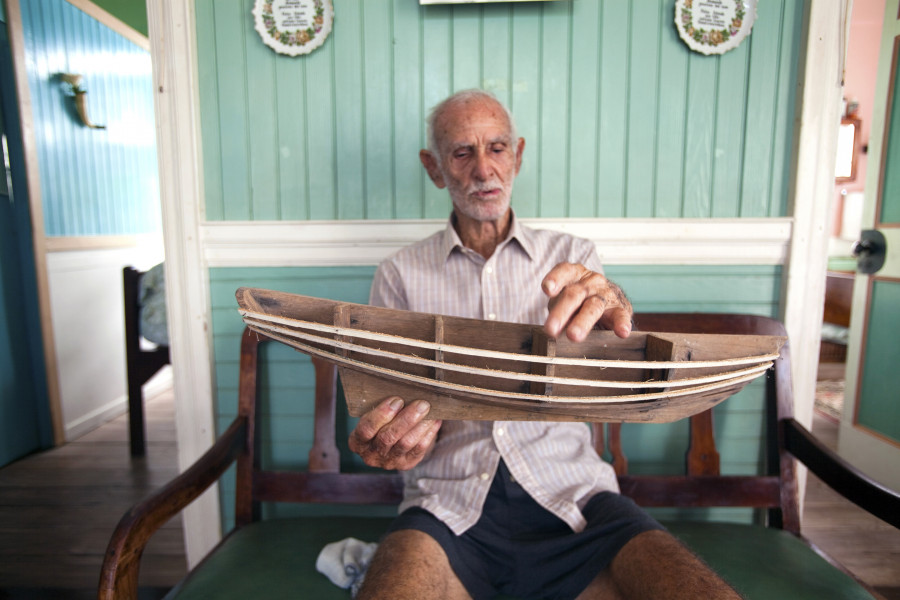 How did the idea for the film come about and how long did it take to make?

The director, Alexis Andrews is a commercial photographer based in Antigua for the last 30 years. In 1997, he purchased an old Carriacou Sloop that had sunk, rebuilt the vessel and sailed to the Grenadines to meet her creator. Each summer, he returned to race and fish with the vessel men of Windward, Carriacou, photographing the old ways for a book project. This is when someone suggested the story would make an interesting documentary.

Filming began in 2010 with the building of new Carriacou Sloop on the beach at Windward. It was to be the last vessel by the master boatbuilder Alwyn Enoe, hoping that his sons would continue his tradition. The film follows his journey of resilience and determination over three years and culminates in a race against time to enter the thrilling Antigua Classic Yacht Regatta.

During filming, we had launched a crowdfunding campaign on kickstarter.com and the support we received encouraged us to go a little deeper and explore the wider history of trading by sail in the islands. It took us two more years to edit down 180 hours of footage and interviews with some of the greatest names in West Indies sailing, then when we had the film locked with sound and original composed music, we premiered at the St. Barth West Indies Regatta where vessels came from all the islands.

What personal connection do you and the director have with the communities where you made this film?

My mother is from Carriacou and a direct descendent of one of the first boatbuilding families that arrived from the U.K. in the 18th century. Alexis also has a family connection, his wife’s Scottish grandfather came from the island so when we met, with the passion of photography in common, the film was something that we both felt compelled to explore together.

This is a fascinating and unique story of shared cultural heritage between Scotland and the Caribbean, and one that exists aside from the context of slavery.

How much do we know about the Scottish people who went out to the Grenadines and started the boat-building tradition?

This is a subject we began to research early on in the production with special access to scholarly studies made in the 1960s but when interviewing living people on the islands, the information often became contradictory. At one point a writer for the Scotsman began researching for a story of her own but like us, ended with more questions than answers.

What other legacies of Scottish culture can we see in these tiny island communities?

A quick leaf through the local phone directory will reveal a host of Scottish surnames and the playing of the fiddle is also a cultural legacy but the music itself is mixed, just as the people themselves here have been mixing African with European blood and traditions for centuries.

What reaction did you receive when you showed it in the local community?

Our first priority before taking our film out to the festival world was to show it to the community where we had spent so much time immersed in the daily lives of the people. We sailed down with a huge screen and hired a local DJ to stack speakers at the Dover Primary School. The event took place on Mothers Day and was broadcast in church so that no one could say they didn't hear about it! The audience reaction was hushed at first, followed by great entertainment seeing familiar faces and events and ending with appreciation and respect for creating a thing of dignity and compassion. Their reaction was especially meaningful to us - had it been different, perhaps the film would not have gone any further.

Do you think the film will play a part in instilling a renewed sense of pride in the boat-building craft and help to continue this tradition?

We certainly hope so! The Carriacou Sloops and Schooners are icons of a great independent period, an overlooked part of the colonial legacy of these islands. A tradition learned from outsiders and made our own. Men taking trees, building fast sailing vessels, scraping a salty living from the sea. These skills are in high demand in first world countries where boatbuilding academies receive governmental grants and state funding. Here in the West Indies we hope to continue to meet passionate and enterprising people who believe in the project and wish to support these communities by commissioning new vessels.