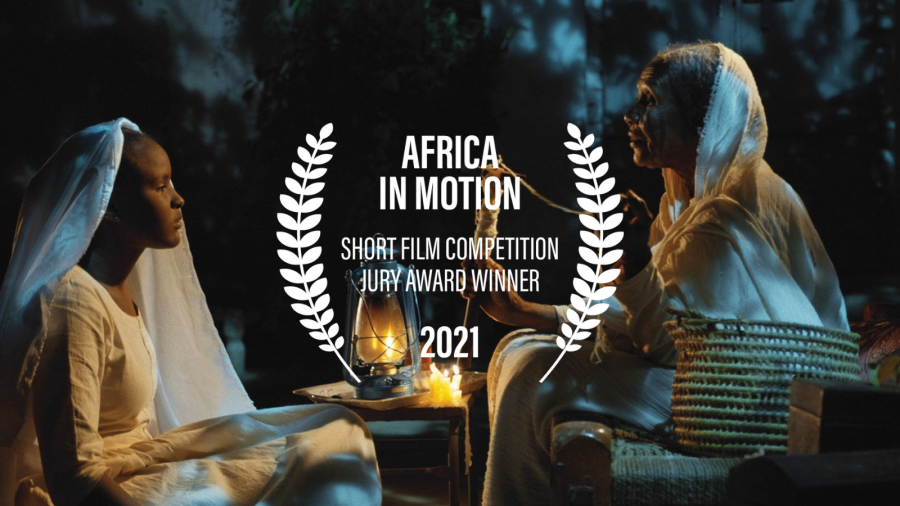 We are pleased to announce that Al-Sit (2020) directed by Suzannah Mirghani, has been selected as this year’s jury award winner of the Africa in Motion Short Film Competition. The final shortlist of sixteen films, all exemplary of the brilliance of emerging African talent, was watched and discussed by three film professional jury members - Eloise King, Ntare Guma Mbaho Mwine and Yared Zeleke - and we have now arrived at our winner!

"There is a dexterity and care in the handling of serious themes of coming-of-age, modernism and post-colonial legacies but the humour in the script allows the story to breath and makes it feel particular in it's framing of what on the surface could be mishandled as the horrors of child marriage." - Eloise King
_
"It feels like an instant classic, and also, feels timeless. The performances were all extraordinary. It was so great to see the range of the young and old performers as well."- Ntare Guma Mbaho Mwine

Al-Sit begins in a cotton-farming village in Sudan, 15-year-old Nafisa has a crush on Babiker, but her parents have arranged her marriage to Nadir, a young Sudanese businessman living abroad. Nafisa’s grandmother Al-Sit, the powerful village matriarch, has her own plans for Nafisa's future. But can Nafisa choose for herself? Mirghani directed, wrote, and co-produced “Al-Sit”, along with Eiman Mirghani, and the film stars Mihad Murtada, Rabeha Mohammed, Mohammed Magdi and Haram Basher.

The process of choosing the Africa in Motion’s Short Film Competition jury winner began months ago, when we closed our submissions in early July. With over six hundred submissions, a viewing committee was formed by Film and Television Studies students at the University of Glasgow, who watched and rated the entries over the summer. The best were collated into a longlist, that after repeated viewing and lengthy discussion, was cut down to just sixteen films. The competition offers a unique chance to platform the works of aspiring African directors, and the range of films that we have had the pleasure of screening year on year is a testament to the creative quality that emerges from the continent and diaspora.

If you missed it, you can still watch AL-SIT until 23:59 tonight, Sunday October 31st