Animated Africa - Stories behind the films 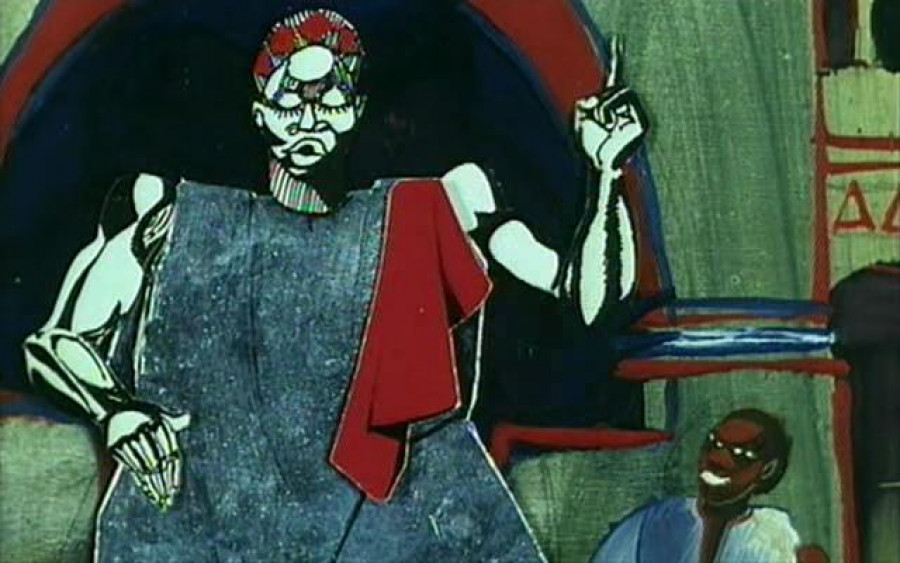 Some of Disney’s favourite fairy tales were developed from the Grimm brother’s folktales and poems of medieval Europe, while 20th Century Fox brought us Anastasia (1997) based on the story of the legendary lost Russian princess. While western culture has long been fascinated by Europe’s old fairy stories, using them as a base for animated films, so too have African animators frequently used the same kinds of influences for their films. Here are some of the stories behind this year’s Animated Africa strand.

Claude La Gallou and Blaise Patrix’s 1986 animated short, La Princesse Yennenga, is based on the story of real life eleventh century warrior princess Yennenga. From the age of 14, Yennenga served many years in her father King Nedega of Dagomba’s army, becoming known for her skills as a warrior, but when she decided she wanted to leave the army to marry and start her own family, her father refused. In an attempt to win her father over, Yennenga planted a field of wheat, but instead of harvesting it she left it to rot, attempting to explain to her father that a field of crops left to rot was akin to a woman unable to marry and have children: wasted and unfulfilled. Unfortunately, Yennenga’s crop allegory failed to change her father’s mind and she was imprisoned. Disguised as a man, and aided by one of the guards, Yennenga escaped her prison and travelled north, leaving Dagomba (now northern Ghana). After meeting a local elephant hunter, Riale, the pair were married and had a son named Ouedraogo, who founded the Mossi Kingdom. The Mossi people lived in what is now Burkina Faso between the eleventh and fifteenth centuries, and Yennenga became known as the mother of the Mossi people, with statues of her still standing in Burkina Faso’s capital Ouagadougou.

While La Princesse Yennenga explores the life of one legendary woman, Jibril Mailafia’s moving Got Flowers Today (2016) speaks to and for women across the globe in a painful story as old as time. Got Flowers Today is the story of an unnamed woman, a wife and mother, who is frequently assaulted by her husband, who always apologises the next day with flowers. Mailafia’s short film uses Paulette Kelly’s poem I Got Flowers Today as a voiceover explaining the images on screen. The protagonist of the first-person poem tells the audience how her husband gradually becomes more and more abusive towards her, but she knows he is sorry because each time he hits her he buys her flowers. That is until the last verse when the unnamed woman is bought flowers because it is her funeral, her husband having finally beaten her to death. Got Flowers Today addresses one of the most frequently asked questions asked of women in abusive relationships: why they stay. The poem and film both demonstrate how difficult it is for women to leave abusive relationships, and how more needs to be done to help victims of domestic abuse. As well as being used in films, Kelly’s poem, dedicated to victims of domestic violence, has been used by women’s advocacy groups and campaigners, and was read out at the 58th session of the Commission on the Status of Women in 2015 by the UN Women Executive Director Phumzile Mlambo-Ngcuka who described ending violence against women and girls as being the missing millennium development goal.

Similarly, Because I Am also takes its inspiration from activist poetry. Lawrie Zidyana’s 2017 short is adapted from LGBT activist Tinashe Wakapila’s poem written as a response to Zimbabwe president Robert Mugabe’s anti-LGBT rhetoric and the persecution of this community within the country. In a similar style to Mailifa’s Got Flowers Today, the film uses Wakapila’s poem as a voiceover while the images on screen bring the words to life. Those words are brought to life by a cast of six women, five of whom are refugees who had fled their home countries, including Ivory Coast, Sierra Leone and Uganda, as well as Zimbabwe, after facing persecution based on their sexual orientation. Because I Am details some of the horrors faced by members of LGBT communities across Africa, with the unnamed protagonist being subjected to verbal and physical abuse from politicians, police, and the general public while walking through Zimbabwe’s capital city Harare.

Alme Swart’s Husse Met Lang Ore (2016) goes back to folktales, blending one of South Africa’s mythical creatures with modern CGI to create a charming story about acceptance and belonging. Although the phrase literally means Husse with long ears in Afrikaans it was adopted by South African parents as a way to stop nosy children from asking questions their parents don’t want to answer. While Husse is essentially a nonsense word, the ‘with long ears’ implies the child having overheard something they were not meant to. By saying ‘Husse met lang ore’ to their children, it was a way for parents to tell their children it was none of their concern and not to ask any more questions about it. There is no hard or fast definition of what a Husse is or what it looks like, however, Swart’s film depicts a Husse as a creature that resembles a lop-eared rabbit with extra-long ears.

These films are part of the programme of short films AFRICA ANIMATED screened in Edinburgh.