Thoughts on Sun and Moon by Amira El Badry 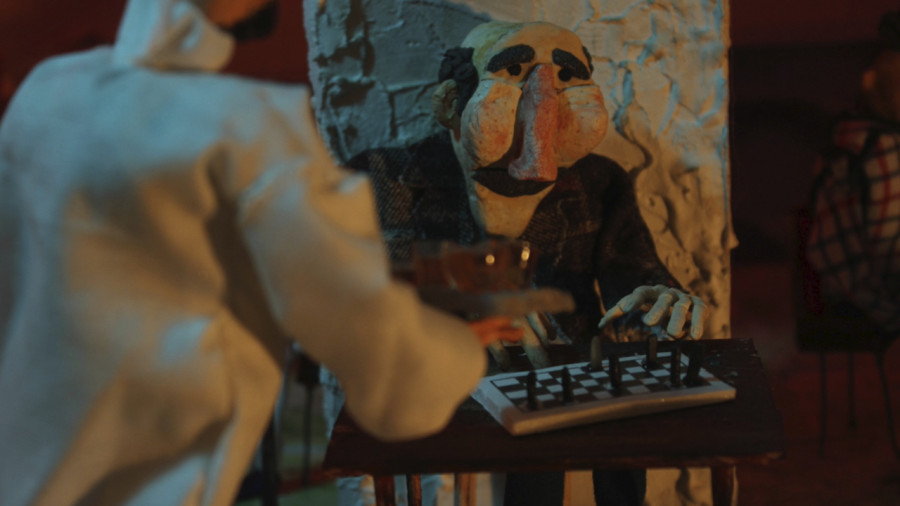 My name is Chang, I am graduated master’s student from University of Glasgow and a current volunteer for Africa in Motion. I was lucky enough to be on the viewing committee for the short film competition and have conducted through email an interview with director Amira El Badry. I asked her about her short film Sun and Moon, a stop-motion animation that portrays a man playing chess in a traditional Egyptian coffee shop, an ‘ahwa’, a place where Egyptian men meet to play cards and board games. In the film, the chess pieces magically transform into different characters to represent the inner turmoil of the protagonist. The pieces battle it out between each other, revealing the polarities humans have by nature, and showing a dichotomy of bright and dark sides within our minds.

My first thoughts were that this was an enchanting and amusing film and I became quickly aware of the duelling representation of good and evil. However, I asked myself, is that all? So, I decided to watch the film again, and again. The more I watched it, the more questions I had and the more I became enthralled by the film. I was a little disappointed when I learned that the chess fighting scene was not designed according to the actual rules of chess. However, after speaking with Amira, I learned that she has always been fascinated by the idea of making the chessboard a reality, imagining how it would function as a real battlefield. She left the chess rule part out of the film to improvise on the unpredictability of emotions and events that take place in life. According to the director, playing without rules visualises the protagonist making sense of his unseen self, his overwhelming emotions and the dominant aspects of his personality. 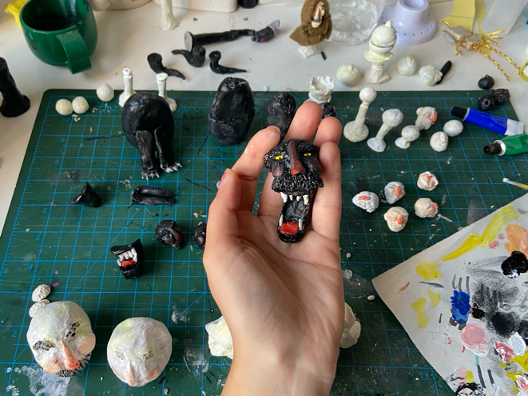 Each object that the chess pieces turn into is symbolic of an emotion or a characteristic of our protagonist. For instance, the man in the hood who resembles a monk, represents his wise and meditative side. He knows how to defend himself whilst being a monk because he is proud of this persona. The butterfly represents the fragile and delicate personality within him, a trait he is at times insecure about. This fragile side of him is then eaten by the black panther chess piece, who represent his darker side. Parts of this battle were inspired by the concept of elves turned orcs once corrupted in Lord of the Rings, says the director. Amira also mentioned how she feels that the black chess pieces were once as peaceful and loving as the white pieces in her mind. She believes people are born as a pure white piece and during the process of growing up, parts of us become dark.

Part of Sun and Moon’s enchantment is it detailed and colourful stop-motion animation. I asked director Amira El Badry about this meticulous process. She told me that although every step is difficult in terms of the actual puppet design, the most challenging part is actually the writing. It is vital that she is precise on every detail of the production process, the props needed and the outcome she is trying to achieve. During the actual making of the set, she mentioned the stress of having to worry about colour clash, making sure the film is as smooth as possible by sculpturing the same character multiple times, then shooting them separately.

It struck me as intriguing why Amira, as a female filmmaker, chose a middle-aged man to portray the struggle that she believes everybody has raging inside them. She replied candidly that there is no reason behind this other than wanting the protagonist to be old enough to be aware of his inner struggles. However, she also alluded to her intention of showing how men typically do not express their problems. In the end, the protagonist remains sitting there quietly, celebrating his success of managing his inner dilemma. In contrast to the self-conscious protagonist, a man who falls in and out of sleep, falls back asleep again at the very end film, giving a comical and light-hearted finish to this wonderful short.

Sun and Moon is screening as part of Africa in Motion's Short Film Competition (31 October - 29 November).