Five Symptoms in Need of a Cure

By Sharon Thomas for our Africa in Motion's Notes Unbound

A psychological disorder characterised by delusions, hallucinations, and false beliefs that maintain in the face of overwhelmingly contradictory evidence.

A Eurocentric worldview and a process rooted in social structures that creates systems of privilege for people who are labelled ‘white’.

The Psychosis of Whiteness (2018) directed by Dr Eugene Nulman, is inspired by Professor Kehinde Andrews’s vital academic research within the fields of Critical Whiteness and Black Studies. The documentary provides a unique opportunity for viewers to explore and test their self-ascribed competence in media literacy through an analysis of the far too frequently inaccurate and misleading depiction of the Transatlantic slave trade within big-budget historical dramas. Narrated by Andrews himself, we are encouraged to reassess our own evaluations of widely accepted perceptions of race and acknowledge key stylistic devices used in various American and British films, such as Amistad, Amazing Grace and Belle, that perpetuate the ‘psychosis of whiteness’ - an inherently harmful belief system built on myths and self-affirming narratives. The themes of the video essay are explored through the metaphor of five distinct symptoms of psychosis, each representing a critical discursive element prevalent within many Western productions surrounding the topic of slavery.

One symptom alone brings up an array of afterthoughts and questions, such as the biased misrepresentation of oppressive bodies as heroic abolitionists, when in fact, the end of slavery can be accredited to economic and political reasoning rather than virtue and morality.

So then why do films within the genre focus on praising institutions for abolishing slavery, when they were the exact same institutions that built, maintained, and profited therefrom?
Why do most films within the genre present slavery and racism as a distant past, when we know that systems of oppression and injustice still exist in today’s time?
How can we pinpoint the organisational, political, and psychological systems that provide the conditions for creative cultural productions to continue to downplay the horrors of slavery while exaggerating the heroic consciousness of individual characters and nations? Especially when the creative liberties taken within these fictional biographies will remain unknown to most audiences.

Even unintentionally, films can sometimes help replicate a distorted view of reality that reinforces the psychosis. Therefore, it becomes even more crucial that we continue to critically engage with creative texts, with a newfound awareness of the devices with which these distortions are created.

Symptom II is only one of the many highlighted within this documentary. However, all should be given the time of reflection they rightfully deserve.

Despite the genre’s questionable history, films exist that indeed feel different from the rest, giving us hope for a future in which deceptive devices, particularly those used within historical dramas, will soon be laid to rest. Stories across the spectrum are gradually starting to reflect a broader, more complex, and layered understanding of blackness. Yet what this documentary achieves to highlight is that to truly understand the meaning of ‘blackness’, we must first deconstruct the notion of ‘whiteness’, as both go far beyond the concept of race. One exists because of the establishment of the other. One is defined in the wake of the other.

The psychosis of whiteness is insidious, as much as it is endemic. It can be found within all corners of the world, and it can affect people of all racial backgrounds. By diagnosing hallucinations as the root of racism, we are immediately discarding rational dialogue and reason as a possible cure to dismantle inequitable systems. Being aware of the systemic problems within cultural production and society as a whole is not quite enough, but it is the first step to recovery. 2020 has given rise to a new wave of discussions on race that rippled across the globe with an intensity and resolution that differed from previous years. In line with what Andrews had already argued several years ago, rather than focusing on racism itself, discussions have started to move towards a willingness to begin to unpack the constructed meaning of ‘whiteness’ - a significant shift from symptom to cause.

Despite its importance, race is still an uncomfortable subject for many to engage with.  However, it is within the discomfort of these very conversations that we may find the closest thing to a cure. 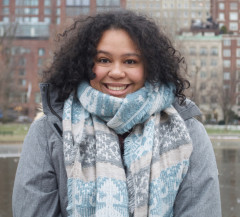 Sharon Thomas is a recently graduated, Swiss-American, Glasgow-based Film Curation Postgrad with a passion for all things film, TV, and theatre. Involved in programming, event planning, and marketing, she has worked and volunteered for an array of screen-related organisations and festivals such as Africa in Motion, Take One Action, the Edinburgh International TV Festival, and Screen Queensland. Growing up in a variety of countries and cultures has shaped her interests in many ways, and she continues to strive to help create a more inclusive future within the Arts - a place where people from all different backgrounds can come together, learn, and grow.