When the air conditioners mysteriously begin to fall off the wall, security guard Matacedo is told by his overheated boss to retrieve his AC by the end of the day. We follow him on his mission set amongst luminiferous scenes in Luanda, Angola that among other things bring him into contact with the eccentric owner of an electronics store in this magic-realist narrative.

This debut fiction feature by Angolan director/co-writer Fradique captures the heartbeat of the city, and acts as a reminder that the city is made up of people and memories, not empty glazed skyscrapers. It is a story of hope, dreams and memories imprinted in the character and histories of buildings.

The film will be accompanied by short film Up At Night.

These films are the last in Africa in Motion 2020. Join us for a DJ set to close out this year's festival on Saturday 29 November at 8.30pm. 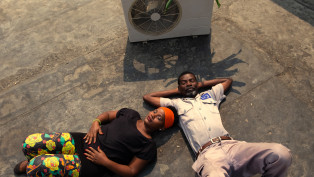 Notes Unbound is our platform for up-and-coming African and Black diaspora film critics and journalists from around the globe to deepen their knowledge of African cinema. Sharon Thomas wrote about how Air Conditioner's surreal tale serves as an allegory about social class and cultural memories.

A message from the filmmakers