We are delighted to present two audiovisual commissions inspired by films from our music strand, Setting Pace. The musicians selected are Nova Scotia The Truth and Gabriella Liandu. Join us in celebrating these two young Black female artists, enjoy the world premieres of both pieces, and hear about their creative process.

NOVA SCOTIA THE TRUTH
Film Title: Not A Good Girl 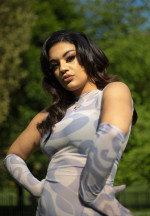 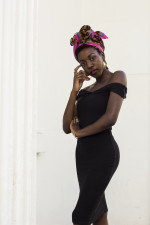 Gabriella Liandu is a Scottish-Zambian performer and creative who channels her musicianship through poetry and song. She takes her roots in performing within the Opera world. Gabriella’s artistry takes her far beyond the operatic stage. Her experience covers a wide range of genres with repertoire expanding through to Bossa Nova, Jazz, Soul and more. The artist made her Jazz debut at this year’s Cheltenham Jazz Festival after selling out her Bossa Nova crossover show ‘Juntos A La Par’ in 2020. Apart from leading her own jazz quartet, the versatile singer’s ensemble experience involves writing and singing lead for Jazz-Neo soul band Odd Soul, touring guitar-vocal duo work, and collaborating in projects for companies with backgrounds as eclectic as her own, such as Birmingham Opera Company, Soundlab and Waste Paper Opera, to name a few. As she forges the path to sharing her solo work with the world, she welcomes pieces such as ’Accept the Clouds’ and ‘Sonder’, as a forever expanding exploration and expression of self.

Inner Visions: Original Music Premieres is screening as part of: