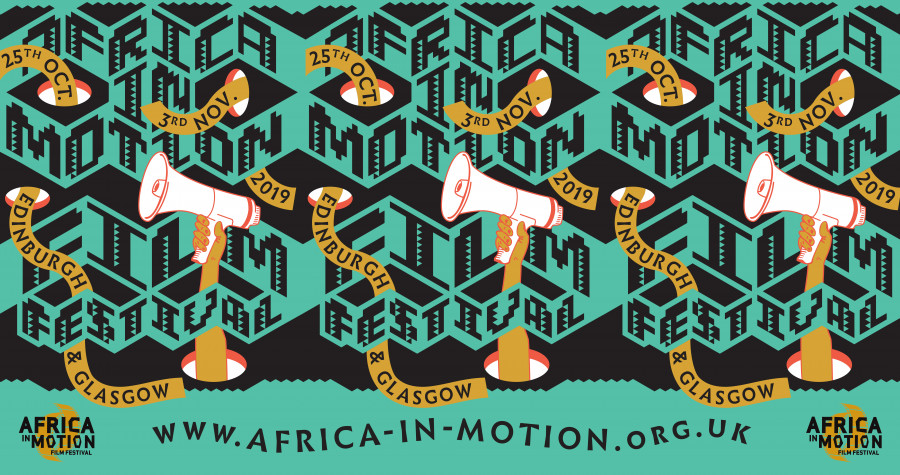 This year, for the 14th edition of Africa in Motion Film Festival, we have taken a collaborative approach to the curation of our programme. This approach comes from a recognition that everyone views films differently and we have therefore endeavoured to create space for as many curatorial voices as possible.

We have committee of curators who have viewed, selected, curated and shaped the festival programme. Meet some of them...

Soukaina Aboulaoula
Soukaina Aboulaoula is an independent curator and program coordinator based in Marrakech, Morocco. With a background in film and audiovisual production, Soukaina’s research mainly delves into exploring the role of internet in the process of archiving visual and artistic production. With Yvon Langué, Soukaina co-founded and co-manages Untitled, a young curatorial, editorial design, and Art direction agency based in Marrakech.

She highly recommends: Talking About Trees: "a documentary about hope, companionship and militantism. A collective of Sudanese retired filmmakers are battling to revive the local film industry, and dream of reopening a theatre in Sudan. The film sets a nostalgic tone through extracts of the collective's works, their late night conversations about their passion for cinema, and experiences of making films abroad... it’s such an honest cinematic experience inspiring enthusiasm, playfulness and generosity."

She highly recommends: My Friend Fela: "This documentary offers a new perspective of the legendary Nigerian musician, Fela Kuti, as told by his close friend and official biographer, the Afro-Cuban Carlos Moore."

Ana Camila Esteves
Ana Camila Esteves (Brazil) is from Salvador, Bahia, Brazil. She's journalist and cultural producer, have been working on projects in different areas, such as music, theater, film, dance and visual arts. She's also the curator and director of Brazilian African Film Festival (Mostra de Cinema Africanos) in Brazil. She holds a master degree, and currently is a PhD candidate in Contemporary Communication and Culture in the Federal University of Bahia where she studies urban narratives in African cinemas.

She highly recommends: Bakosó: AfroBeats of Cuba: "This film shows the rich and inexhaustible artistic and human exchange between Africa and the Caribbean in the 21st century. When I had the chance to interview director Eli Jacobs-Fantauzzi, he said that in Bakosó there is a concern to demonstrate Cuba's connection with African traditions, as well as highlighting the beauty and cultural power of Afro-Cubans, especially regarding the act of narrating their own stories."

Ngueyeli N. Evodie
Graduated of the University of Yaoundé 1 in film and TV production, Ngueyeli N. Evodie is a young filmmaker living in Cameroon. She produced many films shown and awarded in festivals around the world. Since 08 years she directes the international women films festival MIS ME BINGA that takes place in Yaounde in Cameroon. She is also a Curator for films festivals.

She recommends: A Women's Eye 180° More: "This selection of films gives you the opportunity to share the vision of African women filmmakers of African society."

Naomi Gessesse (@essessegn)
Naomi is the Programming Trainee for AiM this year and a writer based in Glasgow.

She recommends: Sakawa: "A really insightful documentary on e-scamming culture among young people in Ghana!"

Myriam Mouflih (@mrrym_)
Myriam Mouflih is a programmer and writer from Glasgow. She is currently working as Programme Coordinator for Africa in Motion Film Festival and has worked for the organisation since 2017. Myriam also is on the committee of Transmission gallery and works for Scottish Contemporary Art Network as Programme and Marketing Officer. Her current research focus is Artists Moving Image from the African continent and the diaspora.

Natasha Thembiso Ruwona
Natasha Thembiso Ruwona is an artist, arts educator and curator based in Edinburgh/Glasgow. Her practice is research based and deals with the topics of post-colonialism and the processes of decolonisation through the mediums of poetry, digital art and performance. Natasha is interested in knowledge as a curatorial process that can be challenged via art and anti-colonial methods, as well as how the structures of arts institutions perpetuate white supremacy. Natasha’s curatorial practice also prioritises the presence of People of Colour within these spaces through challenging these structures and by creating opportunities for PoC.

She recommends: The Last Angel of History! (In: Black to the Future)

Carmen Thompson (@graspingroots)
Carmen Thompson is a PhD candidate, curator and marketing consultant working in film distribution and festivals and is this year's Marketing Coordinator for AiM. Her current research is focused on women filmmakers working with documentary in Kenya.

She recommends: Afro-Brazilian Shorts: Narratives on Memory "This collection of shorts really shows the power of the documentary form for exploring histories and bringing memories to life. The films are deeply personal and more than anything are filled with so much joy!"

Stefanie Van de Peer
Stefanie is a lecturer in film and media at Queen Margaret University, specialising in Arab and African women's cinema. She has worked for AiM since 2008 and is now a board member and occasional curatorial advisor.

She recommends: Battledream Chronicle: "This animated feature film from the diaspora is an underappreciated master stroke."

Lisa Williams (@edincarib)
Lisa Williams is the founder and director of the Edinburgh Caribbean Association that promotes Caribbean culture in Scotland. She runs Black History Walks in Edinburgh, school visits to promote understanding of Scotland’s Black heritage, and youth projects to explore Black history through the arts. She runs a range of cultural events and chairs at heritage and literature workshops and festivals. She is a Lead Reader for Open Book; facilitating a reading and creative writing group at the National Library of Scotland. Lisa has had articles and reviews published in newspapers, journals, arts and heritage blogs and resources for use in secondary schools, and given talks at conferences and events across the UK and the Caribbean. With a BA in Social Psychology and African and Asian Studies, currently studying for an MA in Arts, Festival and Cultural Management, she is also an Honorary Fellow in the School of History, Classics and Archaeology at the University of Edinburgh.

She recommends: Forward Ever: The Killing of a Revolution: "The story of the Grenada revolution"